Save Pakistan in 30 Days

Home » ARTICLES » Save Pakistan in 30 Days 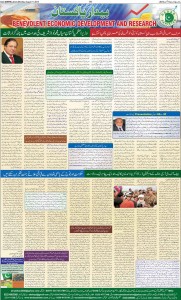 Its not a fiction, Dr  Niaz Ahmad Khan is a free lance economist. Three American universities have granted him honorary  PHD degrees in Economics, Business administration and Finance for presenting his research theory based on Islamic economic principles. He has presented an unique interest free economic plan through which we can revive the economy of Pakistan in just thirty days.

SAVE PAKISTAN IN 30 DAYS

Pakistan will become an Asian tiger. Prices of all commodities delivered by government will decrease in three times. About one million people will get instant employment opportunities. Pakistan will get rid of its all foreign and local loans within just one year. Pays will increase three times. All utility bill will be decreased three time. All taxes will be abolished.Production cost will reduce fifty percent. Country will be able to get rid of terrorism,illiteracy, unemployment, poverty, Feudalism, extremism, smuggling, capitalism, narcotics, corruption and other social and economic evils. Pakistani economy will shifted from interest base economy to interest free Islamic economy. Government will get three trillion rupees in thee start of the financial year.

Dr Niaz Ahmad Khan has announced 10 million American dollars reward for a person who will prove his economic theory wrong. But for last 20 years nobody could challenge his theory but government is not ready to implement his plan. I could not understand why?  Government should form a committee of economists to discuss the pro and cons of mutual benefit card system with Dr Niaz Ahmad Khan. If he could not prove his theory then government can get 10 million dollars penality from him for wasting the time of authorities.

Dr Niaz Ahmad khan is a true patriot who has spend about 20 million rupees on this program. He has presented his mutual benefit card system in more than 200 TV talk shows. He has published unlimited paid newspaper supplements about his program to draw the attention of authorities towards his program but no vain. He is a eye specialist by profession and is working as head of eye department in Alzohra hospital U.A.E. He visits Pakistan off and on just for trying to contact high authorities but no one is listening his voice. What type of people we are and what kind of nation we are? Why the the people who are controlling the helm of affairs are not ready to save Pakistan.

It is my humble request to present regime of country, kindly contact the genius of Pakistan Dr Niaz Ahmad Khan to save Pakistan in 30 days. Brothers and sisters you can see the details of mutual benefit coupon system in Urdu on this page and soon we shall write a detailed article on it too. I want to convey my message to Dr Niaz that we and our team is with you and we shall try our level best to promote this interest free system in Pakistan because as Muslim we believe that interest is against the teaching of Islam and it must be abolished from the country. Long live Pakistan.