The Only & Probably Last Solution of Israel Palestine Conflict
If you want to appear in any competitive exam and looking for some great analytical articles on current affairs, international relations, foreign affairs or international politics then now you have landed on the right website. Studysolutions.pk tries to publish detailed analytical articles on these topics. Today we shall discuss the only and probably last peaceful solution of  Israel Palestine conflict. Palestine issue has become the cause of all current burning problems of Middle East and Arab world. You may believe or not that Palestine issue can also become the cause of third world war.

Everyone admit that the Palestine was the home land of Jews about three thousands years before but it has been the Arab dominated region for 1400 years. Arab and Muslims always tried to help Jews in Spain and Palestine. Muslims always tool the Jews as people of book but unfortunately Jews always took us as their enemy number one. As per Holy Quran their are some God fearing Jews too but they are in minority. Palestine is the land of Arabs and jews have captured their territory illegally. UNO has become a toy in the hand of Israel. Israel is not ready to admit the rights of Palestinian people. Earlier whole West was in the favor of the Israel but now many European countries are admitting the state of Palestine.

Solution of Israel Palestine Conflict
Solution of Israel Palestine conflict is not difficult at all. Now majority of Muslim countries are ready to admit the state of Israel if Israel declare the Jerusalem as a international city. Jerusalem was the first Kabbah of the Muslims and no Muslim even can think to compromise on this issue.Few years before Saudi King presented a very reasonable solution of the Israel Arab conflict which was not accepted by the Israel. Israel playing a great game in the Middle East but who knows that what will be the end of this game. Palestine issue is not only between Arabs and Israeli people, its an issue between Muslims and Jews. Unless a single Muslim is alive in the world this issue will remain alive. 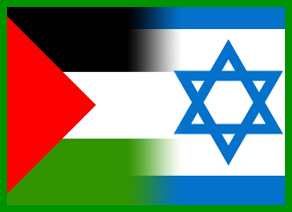 Israel Palestine conflict has also become a nuclear flash point in the world. Every body knows that Israel is an unannounced atomic power. Iran is also trying to become the atomic power to counter the Israel and Pakistan has become an atomic power in 1998. Although Arab countries and Iran have lot of differences on many mutual issues but as far as Israel is concern they are on the same page. First Israel destroyed the atomic installations of the Iraq then destroyed the military power of Iraq and Syria through its allies but the end result of all theses exercises was more dangerous for Israel. Extremism and militarism have spread in the whole Middle East. These two elements are equally dangerous for Israel and Muslim countries.

No body can control gorilla warriors. Israel should change its policy towards the independent Palestine. Jerusalem should at least be declared an international city under the control of UNO. Extremism is equally harmful for all societies, religions and states. If Israeli government will not admit the ground realities then peace in the region will remain a dream. Israel should open its atomic program for IAER. After these initiatives by Israeli government all Muslim countries should agree on Saudi peace formula in the Middle East.

Peace should be given at least one chance in the Middle East but now Israeli government will have to take the initiative. Mutual coexistence is a golden principle in the international politics. Being the people of book both Muslims and Jews have many similar elements but non tolerance policy of Israeli government is the root cause of all disputes in the region. Muslims respect the holy book and all the messengers of Jews, there is an need of reciprocal emotions from the opposite site too. Please don’t wait for the third world war or Armageddon. Western countries are now feeling that Israel Palestine conflict is the root cause of instability, extremism and terrorism in the world.

They are recognizing the independent Palestine state. Without the help of international community it will be hard for Israeli government to suppress the Palestinian independence movement. Now its the right time to to admit the need the peaceful resolution of Israel Palestine conflict. Muslims have very wide heart they are ready to admit even the illegal Israeli state if their sacred places and Palestinian Arabs will be given protection. Otherwise nobody can stop the third world war and Armageddon. Visit studysolutions.pk specially its current affairs category and facebook page for latest alerts about international politics, foreign affairs and international relations.  Hopefully you will like our facebook too.